A while back you probably have seen me mention a game called Sonic Robo Blast 2 Kart. I was routinely creating characters for the game until I decided to go on hiatus to focus on other projects, including but not limited to trying to work more on artwork, produce more sprite sheets for a site known as The Spriters' Resource, and work on my Splatoon 2 skills. Plus my workspace (aka my bedroom) was renovated over the course of eight days, resulting in me having to abandon it for almost all of the previous week.

Now I'm back, and my time has been swallowed up still by other things, but I'm still not feeling the drive to work on more SRB2Kart characters. Yes they're in production, but lack of motivation is leading to them taking longer than I hoped to finish them.

Anyways, back on topic. Before announcing the semi-hiatus I was suggested by my friend MMG Mike to adapt all eight of the racers from Super Mario Kart into Sonic Robo Blast 2 Kart. Normally, something like this wouldn't be allowed on the SRB2Kart message board thanks to them being sprite rips, so I had to rely on other means of getting them out into the wild, and I figured this blog would be perfect place to host the project. 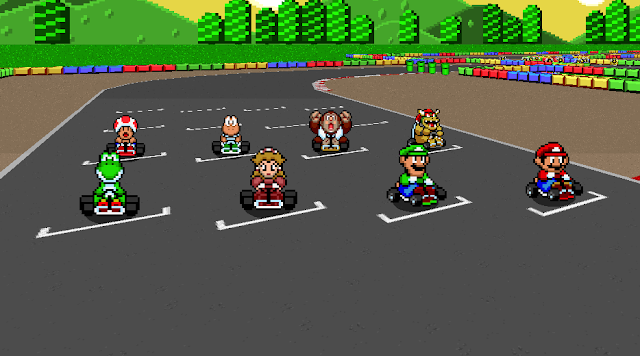 So I took a sprite-rip of the eight Super Mario Kart racers I had on hand (but don't remember where I got them from), carefully aligned them, gave them recoverable bits, Mario Kart 64 voices, and (courtesy of community member Tiniest Turtles) mini-map icons, and then declared them finished.

All the characters are given stats that best replicate their stats from their source game, though they should be easier to control now that you're dealing with a more modern, less dated drifting system.