Seems like I should get a blog post up on this blog too so this one doesn't end up without a post for the month. Kinda hard to keep the motivation brewing when my main user base these days is Twitter.

Anyways I thought I'd lament a bit on one particular site of mine from my middle school years, a little site known as Newgrounds. Discovered by myself in early 2005 (having already existed for quite some time, back when I was in elementary school nonetheless), I mostly grew attached to the site for all the Super Mario and Sonic the Hedgehog (and soon, Mega Man) fan-made games but played the occasional dose of original content. I've always thought of contributing myself, but was too young at the time and even now I never had the time or money to afford and make content in Flash. And now with Adobe Flash closing in 2020, it may be too late. The only things I ever submitted were some art back in the days of Super Justin, but since it was all crap, I nuked it. There was some more normal content I tried posting there too, but, well, it's not exactly easy to build up a following on that site if you don't make Flash games and animations.

There was one other element of the site that would catch my attention in the early years of me using the site. For some time I would always question the orange-haired kid that populated the site's (at the time) ratings bar. Aside from looking vaguely like this one kid with literal fire for hair that I would see on T-shirts in the 2000's, that is.

(take note that what I'm about to discuss is a child character doing pretty South Park-esque things (he smokes and uses guns), so if this kind of stuff offends you I suggest not looking up the various games and whatnot the character does; of course I don't mention any of this in the article but whatever) 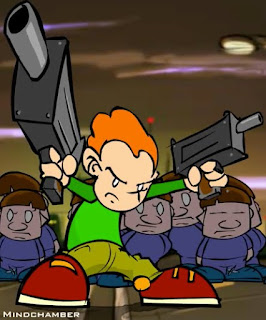 A few months after I started frequenting the site I would end up discovering Newgrounds' mascot, Pico. His games were crude, filled with adult humor, and contain the kind of things ten-year-old me was not used to during the time (or even noticed). But they were fun, if a bit short (but then again these games were old). Then on April 30th, 2006 there was a big event dedicated to the kid, known as Pico day, where fans would upload Pico-related content. 2006 was pretty great, and 2007 hit the ball out of the park, but then 2008 felt a bit lacking in some departments. 2009 was more of the same, and I remember 2010 having a few good hits as well, but then I stopped caring by the time 2011 happened, and with each passing year I simply kept overlooking Pico Day since I had lost interest in Newgrounds as a whole during my last year in high school.

I did buy the stickers long ago before they went out of print, though I have no idea what I did with them.

What also made these Pico Days special to me was that they used special Pico-branded loaders for each Pico Day. 2006's and 2007's went the extra mile and turned their loaders into short animated clips featuring the adult-mind-in-a-kid's-body.

2007's was especially smooth, and it was a bit disappointing to me that from then on, future Pico Day loaders went with static images or simpler looping animations before they seemed to just stop using them altogether in recent years. They're still great images for sure, but they don't have the extra oomph that an animated loader would.

So yeah, that's me and Newgrounds (and Pico) in as abridged of an explanation as I can provide. Now watch as I end up nearly skipping posting anything next month.
Posted by Justin De Lucia at 9:47 PM No comments: