So it has come to my understanding that a little game called Ms. Pac-Man Twin finally got a dump after I had discovered the game and made mockups back in 2015 of what the game would have looked like had it been applied to more authentic hardware. I say that because the actual version takes quite a couple liberties with the source game. 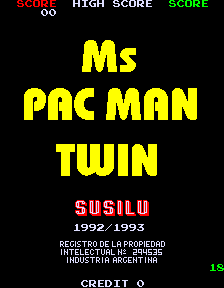 To no one's surprise, it's a bootleg running off of knockoff hardware with a daughterboard slapped on, and many elements of the original game were straight up butchered or otherwise lost to SUSILU's attempts at getting a second Ms. Pac into the game. Perhaps the most notable difference is how... different it feels to play. While you can play it solo, the experience practically begs to be played with a friend- each with a set of Pac-dots to themselves. And the round doesn't end until all of them are gone. Heck, a player can even steal the dots of the other player if they finish early to speed up the process (even earning double the points for eating the dots not of their color!). Its definitely got a more competitive edge and it does it far more confidently than Tengen's versions of Ms. Pac-Man through the early 90's, if only because players don't have collision with each other and dying doesn't force both players to respawn in a process that takes ten seconds. Fruit and intermissions are also MIA, in part due to the bootleggers deciding to stick in a fancy new title screen that overwrites all the necessary graphics and a longer death animation.
The other big noticeable difference is the sprite of the player characters themselves. For whatever reason, Ms. Pac received a whole new sprite-set edited from Pac-Man's sprites and they're... freaky to say the least. Smaller, single-pixel eyes, a larger bow, and going completely over on the lipstick department.

Of course being the sprite-artist I am (at lest, in a way) I tried to fix up the sprites to be a bit closer to the originals. Aside from the title screen, the revised HUD, and the new "double dot" tiles, there's no other custom spritework in the game.
With the game's most prominent elements covered, there was another thing I discovered upon looking at images of the game's title screen across the web and it may give some clues as to why the board was so rare. Take a look at the title screen one more time, particularly the bottom right. Notice the green "18" printed in the corner. That number never seems to change no matter what. Compare that to the oldest-recorded video of the game taken on Robbie's homepage: 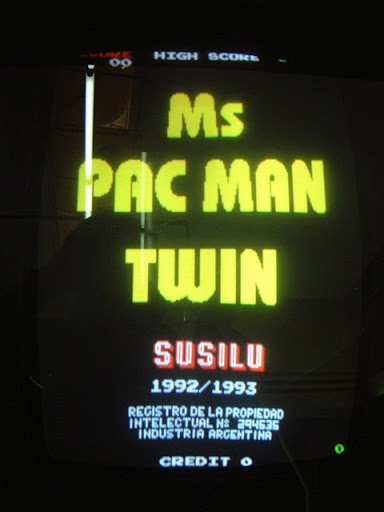 The ones digit is cut off by the monitor's edges but here you can make out a 0 in the lower right corner in the tens digit. Likely, the full number is 01-09. 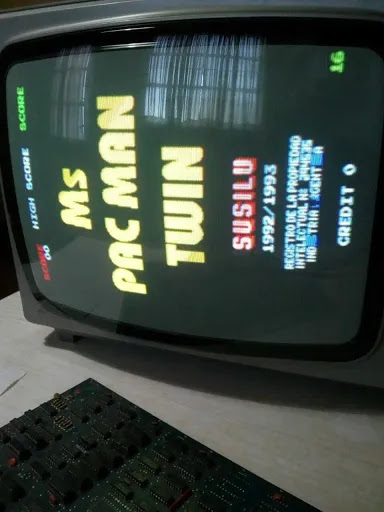 And here we have a 16, cleanly visible from photos of a board that was sold on eBay last December. If my understanding of this is correct, then these numbers would indicate the build number associated with each board- meaning the board the current MAME dump is associated with is Board #18, the one from the eBay auction is Board #16, and the one from Robbie's coverage is any board from #01 to #09.
With this, we may now know why Ms. Pac Twin was so rare to find and took almost three decades to get a dump: not only was it made in Argentina, South America in 1992/93, a time when Pac-Man bootlegs feel out of relevancy especially if you compare it to bootlegs like Hangly Man or Ms. Pac-Attack, the board had a very limited print run to boot, possibly having only twenty or so boards in circulation compared to the hundreds of thousands amassed by the more widely produced originals. It also never got its own dedicated machine and was stuck in generic cabinet after generic cabinet intended to be filled with other games, making it harder to spot and possibly leading to some confusing it for the original game.
So that's Ms. Pac-Man Twin, a charming little bootleg that I'm glad to finally play in an official capacity but I can't help but admit that I'm a bit underwhelmed, especially with the six years it took between me discovering the game and seeing it finally dumped and released. Then again it's a hack of a 40-year old arcade game so you can't expect too much.
Posted by Justin De Lucia at 8:29 PM No comments:

Okay, this post came out of left field so I'll make it brief. No I've never seen Little Nicky and from what I've heard it's a trainwreck and Adam Sandler may have... not been the greatest choice for the lead. Fitting considering today's subject.

Back in 2018, the video game tie-in to Little Nicky was one of the games presented on Vinesauce's "Quality GBA and GBC games" stream in August 2018. After having played it myself, the only opinion I can give is that it's playable, but hard, especially since there is no proper difficulty curve, you don't heal inbetween levels, and you cannot continue once you're out of lives. The backgrounds may be decent but the sprites are rather sloppy looking (especially the faces) and the levels are not designed around the limited view you're given thanks to screen crunch. 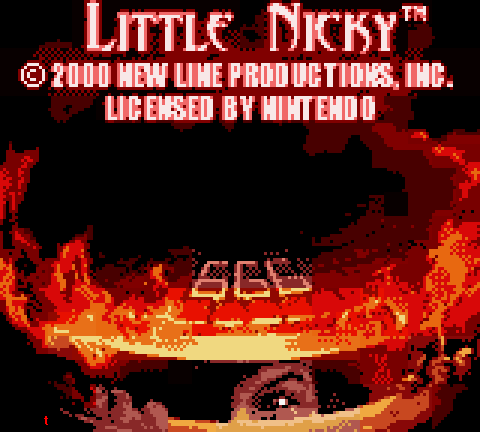 This is not the game's boxart- I went with the first copyright screen because the actual boxart is atrocious.
The soundtrack on the other hand, done by Robert Baffy, is what caught me onto the game during the aforementioned Vinesauce stream. It's no contender for best Game Boy music or even the best VGM of 2000, but it still features some catchy themes despite coming from a game based on a movie starring Adam Sandler.
This rip contains all 13 (heh) tracks from the game's sound test (or the "Metal Mix" as the game calls it), as portrayed by the emulator bgb. It's probably the best I can get the game's soundfont to cooperate and not sound butchered considering there's not really any other Game Boy game with this kind of hard-rockin' music to memory.
I'll be quiet now and give you all the download link.
Posted by Justin De Lucia at 3:50 PM No comments:

Back in my high school years I entered a phase where I begun relentlessly binging Breakout and Arkanoid clones. If you've been to my blog in the early to mid 2010's you may be familiar with my discussions on Aquanoid and Electranoid in particular, which were DOS-based and in the case of the former I created roughly 450 levels (but couldn't really share them due to the obscurity of the title and how the custom levels were formatted). This, however, is nine/ten years later and I've moved on from the great Breakout binge, especially with all of their assets now on The Spriters Resource thanks to yours truly. Still, there was that one Breakout game that I never really delved into, the DX-Ball games.
Created in 1996 and followed up by a sequel in 1998, these were Breakout clones based on the Commodore Amiga game MegaBall v3.0, featuring a wide play field, dozens of  levels, a colorful palette of blocks, and a range of helpful and not-so-helpful powerups. Recently, the sequel got a full digital re-release on Steam, titled DX-Ball 2: 20th Anniversary Edition, and it'll be most of the focus of this blogpost going forth.
Except, it's not the only focus. Not long after the initial release of DX-Ball 2, another breakout game launched in 1999- called Blast Thru. This game seemed to take a lot of inspiration from DX-Ball 2, including the playfield sizes, block types, and especially the powerups on offer. Unlike DX-Ball 2 which continued to be sold through even the 2000's and 2010's, Blast Thru became abandonware after its publisher folded and the game can easily be downloaded in full.
After getting my hands on the Anniversary re-release of DX-Ball 2, and since the games were very similar to begin with, I went and did a full conversion of Blast Thru's 40 levels using DX-Ball 2's built-in editor. 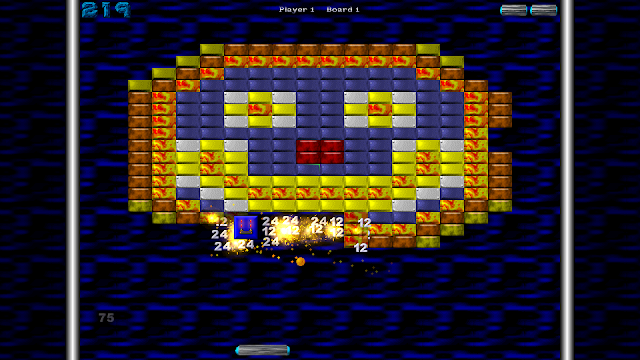 The result was a full-on near-perfect re-creation with only relatively minor differences. The biggest difference was the area in which blocks could be placed- it reaches to almost the very bottom in Blast Thru but in DX-Ball 2 it's several blocks higher, so many of the levels were changed to accommodate for the reduced available space for placing blocks. There's not really much else to describe, considering both games' heavily similarities to oneanother.
You can get the Blast Thru boardset here.
Posted by Justin De Lucia at 2:22 PM No comments: