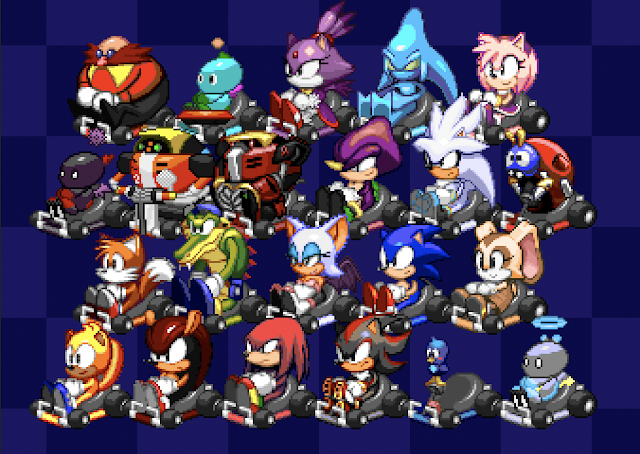 Going into this article, you’re probably wondering where did I get an idea like this from? Well, back in 2019 I spent quite a bit of time making custom mock-up colors for Sonic Robo Blast 2 Kart and I teamed up with a user in the game’s community named Xkower to produce Collabcolors, a community-made color pack for Vanilla that operated as its own .exe. However, you could not bring these skincolors online into net games unless others also had the .exe and players without it would be displayed with the wrong skincolors. Vanilla Sonic Robo Blast 2 would give server hosts the ability to add on extra skincolors in Version 2.2.5 through scripts, whenever they be traditional skincolors, wild and wacky skincolors meant to be jokes, and a whole slew of animated skincolors.

Before jumping into the project, it's important to note that the game is capable of displaying up to 256 colors and cannot (outside of OpenGL mode) display any color outside that palette. Since Sonic Robo Blast 2 Kart was built from version 2.1, various changes that would occur in the palette to expand the versatility of the colors featured in the jump from version 2.1 to version 2.2 don't exist. However, you can use a program called SLADE to convert graphics in the 2.2 palette into the one featured in 2.1 and vice versa, and the alterations will be immediately noticeable. For instance, this is what happens if you take the 2.2 palette and convert it to 2.1: 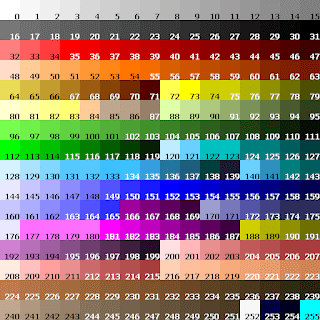 *Pale yellows, depending on the shade, are converted into light yellow, light orange, or light beige.

*Rose pinks become pale pinks, matching the ones already in the game.

*Seafoam greens become light cyans on the lighter end and teals on the darker end.

*Royal purples are converted into light blues or dark magentas depending on the hue.

It gets a little better if you take the 2.1 palette and convert it into 2.2, with the only change worth noting is the different type of teal used between the two palettes. But anyways with the above notes in mind I began to backport the more unique colors from vanilla Sonic Robo Blast 2 version 2.2 into Kart. The list of converted skin colors, in addition to the customs mentioned further down the article can be found in this gallery. As everything in this portion was a “Vanilla” color by technicality, I opted to merge them with Kart’s vanilla list:

Most colors in Vanilla, excluding the very dark colors, end with a dark color of the color’s shade. In Kart, all but the lightest colors fade into pure black (color 31). You may also notice that several of the ported Vanilla 2.2 skincolors share their names with several of the Kart colors. No color between the two are 100% alike but to go over exactly how all the skincolors with the same name compare would take too much time out of this read, and the skin olors that were chosen to be ported over were the ones that I felt offered something new to the table or showed just how a skincolor like Peridot would work in Kart without the necessary colors they used in 2.2's palette in the ramp.

Of further note is Color 247, the bright neon cyan or teal. This color is never used in SRB2 and SRB2Kart’s internal graphics at any point, only seeing use to render transparency in textures in vanilla SRB2 and on skincolors in SRB2 2.1 and 2.2 (though in only one instance each). Meanwhile, Kart does not use color 247 for any skincolors by default, only using the darker teals that occupy Colors 220 through 223. It is still possible to see the color in-game if entering a colored sector that turns the sprites to a bright teal such as the underwater section of Paradise Hill Zone and through modding, players can add skins and sprites that use color 247. If the EXE is modded directly, skincolors that use color 247 can be added and will apply onto character skins without issue.

Still, there came the name conflicts and having to rename them all. The names chosen were influenced by some of the colors from the original Collabcolors, as well as the Mega Paint Drive (my spiritual successor for collabcolors) created for Vanilla and in one case, Super Sonic Robo Blast 2 Kart Z. Furthermore to ensure compatibility with the hundreds of characters in Kart already, none of the preexisting Kart colors had their names altered or ramps changed, and no character from the default cast or Bonuschars would have their prefcolors changed for consistency.

Following reconfiguring the Vanilla colors to better work alongside Kart’s, it was time to adapt the skincolors from Collabcolors. In the end, the ones I ultimately went with were colors I considered unique enough from both the Vanilla and Kart skincolor selections or had some other niche to warrant their inclusions. Understandably, this would mean a lot of colors from Collabcolors would be scrapped or receive major changes, and the colors that I did pick were the ones I considered “useful”, and which ones would work the best with custom characters in mind. In order to avoid dragging the number of colors through the roof, owing to the smaller number of available spots for extra colors in the .exe compared to Vanilla and the presence of the Vanilla recreations. The final list of add-on colors became:

The original plan called for 70 new skincolors but an extra two snuck in. The final result at least meets my specifications and 102 extra colors along with the original 100 is plenty enough. So then comes the tricky part: Getting everything into the game proper. Vanilla 2.2 has support for custom colors through addons- Kart, as you likely know, doesn’t. Thus, the only way to add the skincolors at this time would be to modify the .exe while steering away from changing/resorting the values of the skincolors. The only solution I could decide on would be appending the new skincolors to the end of the list after Lilac, starting with Bone from the Vanilla recreations and ending with Elderberry in the customs, keeping them as is from there or using the M_MoveColorBefore and M_MoveColorAfter functions in Vanilla to re-order the new skincolors alongside the 100 Kart colors while preserving their values.

The last bit I’ll mention (since this article is getting rather long) is the invcolor, short for Invert Color. This is the skincolor’s opposite on the RBY spectrum. Red uses Green, Blue uses Orange, Yellow uses Cyan, Black uses White, etc. This doesn’t apply to every skincolor, for instance Ketchup (a red skincolor) uses Mustard (a yellow skincolor) since they’re part of the same “condiments“ theme. This aspect of the invcolors would carry over to these new skincolors as well, either using the color’s direct opposite or another color based on the same theme. Vanilla 2.2 lets you pick which shade of the invcolor is used (out of 16), while Kart only has one shade (using the sixth color from the top of the ramp).

Any-who, that’s all I really got on this without dragging on the length of the post. I wanted to make this post and all the accompanying mock-ups more for the “What-If” novelty than anything else. Even if nothing comes out of these ideas I wanted to get them out into the wild anyways and I’ll admit it was fun re-creating all these in the time that it took.

Posted by Justin De Lucia at 11:44 PM No comments:

Email ThisBlogThis!Share to TwitterShare to FacebookShare to Pinterest
Labels: SRB2Kart

It is now a few days after my 27th birthday and it feels like very little, if anything, changed. The pandemic is finally starting to evaporate in my area and things are starting to return to normal, but I still don't have any plans to make appearances at major conventions hours away from my residence as I have from 2016 to 2019. That said as the summer starts to close in late July or even August or early September I would like to get back to meeting with friends IRL and find other ways to get some of the motivation I lost in the middle of the pandemic back.

I'm saying this since after having stalled getting it for Christmas, I finally own an authentic copy of Game Maker Studio 2 on both my Macintosh and my PC. However, I don't feel like I'm ready for the program just yet, in part due to the aforementioned lack of motivation brought on by the pandemic, me not really being sure where to start learning the ins and outs of the program, some extra bits of setup, and me trying to improve my conditions and physical health IRL. You could also say that since this is unfamiliar territory for me I'm hesitant to just jump straight in, especially since I've been more accustomed to being in the director role than coding the project itself, considering the relative age of most of my concepts. Then again the tutorials exist so I might as well do a bunch of those.

I also have a couple of minor projects left that I'd like to get to beforehand before I decide to jump into Game Maker full force, namely my first piece of full art since September 2019 as well as the last big update to my Sonic Robo Blast 2 skin color pack. And that's not getting into the many character bios and game concepts I'd like to document and share parts of before I start considering developing them proper.

Other plans of mine include planning out a full website to better house my works and conceptual ideas as well as launch a new, more smartly-run Discord server. Even if the former ever were to come into existence, this blog will still remain intact and I'll continue to use it into the foreseeable future for things not related to content that would be on the site and Aozora as a whole. But for now, this blog will remain my central hub. For anyone interested in my original characters, I will eventually get started with building up my Toyhouse with smaller/abridged bios for everyone as an alternate to the Aozora Wiki.

That's all for now, See you in July!

Posted by Justin De Lucia at 11:17 PM No comments: