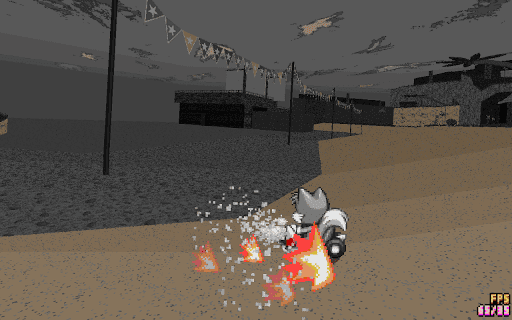 I think it's pretty obvious by now that I latched onto Sonic Robo Blast 2 Kart for all the time since it came out. Though I've stopped playing online due to various circumstances I'd rather not get into, I'm still working in the background on custom racers to fill some stat blocks that aren't occupied by the base roster and what stat combinations aren't occupied by it.

Last month I released Wayne, the main protagonist of Hylics 2, after having started on it last August and afterwards getting sidetracked by both re-making my OC's (with more to come) and well, you know the other thing that happened around the time. What drove me to finish him earlier than I had thought was the occasional response/message on Discord of people looking forward to seeing him done (and to those that did, thanks for the motivation). Even then I still have five, maybe six other racers on the agenda, and maybe a few others on the backlot that I started on or am waiting until I complete a few more main racers before I tackle them proper. Recently I decided to get back into the swing of doing art since I've been sitting off doing it since late 2019, and since I've been feeling burnout and the desire to do something else (including character bios) I decided to take another break from making kart racers. Whenever it's a full break or a semi-hiatus, I don't know.

Now you're wondering, what the heck else do I have for this game? Well I had to significantly scale back my plans following the hard drive failure and the realization that eventually I need to do something else, including maybe gamedev stuff at long last, so I trimmed down the list of characters on the agenda so there's a chance I'll be able to call myself done with SRB2Kart when it comes to new racers.

Of course the rest is TBD but at this rate consider these plus a few remakes down the line and some other surprise additions. V2 prep is also being considered (as in, the new palette and lookback frames- the new kart body isn't available until it does release) but not a priority.
Posted by Justin De Lucia at 9:08 PM No comments: