Hey there. I'm not really sure what to go on about in terms of content, just haven't been feeling my usual wave of creativity as we speak.

Partially from how stagnant (and dare I say, boring) my personal life has gotten as a result of the pandemic. Virtually every convention in the foreseeable future is postponed, local businesses are either closed or greatly impacted, and I'm not able to go meet up with others in public, whenever it be at the redemption arcade or wherever. It's sad, honestly.

So it's discouraged me from trying to get stuff accomplished just from how... I won't say depressed but I wouldn't say it's super-great either things have been. SRB2Kart is still the main focus and I might end up spending the whole rest of 2020 finishing up the mass selection of racers I have planned. And well, I'll see when exactly I get to finish them cause I've been struggling a wee bit with them. That's what not being exactly super-motivated does to you, so I unfortunately can't give an exact release on Springman or Sunset Overdriver other than "we'll see", so expect one of them to drop in mid to late June. And if 2.0 Kart ever stealth-drops, I'll start on a project to get all my current racers in the new kart frame model before I resume with making more (which shouldn't take as long apart from the sheer number of racers there are to convert). 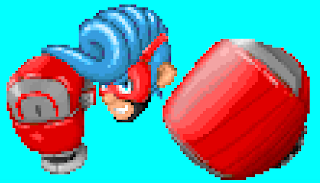 Onto other things- I would like to get started on some art sometime this Summer, but when in the summer is still in the air. It all honestly depends on how much I'm able to get done with other things and if I'm not super bummed out from not being able to do anything interesting since mid March thanks to the pandemic. I did write a few things about the Aozoraverse but it's not really in a state that I'd like to share it, and I'm still leaning towards relying on outsourcing character designs to other artists for the time being- though not really as often as I once did with the increasing prices artists charge for designs and DeviantART being pretty near-unreliable for getting designers that do the exact kind fo character you want.

Anyways I'll stop here cause I don't know what else to say.
Posted by Justin De Lucia at 10:51 AM 2 comments: