Yup, you heard that right. Around the time of AnimeNYC last year I developed a prototype design for a business card I could pass out. 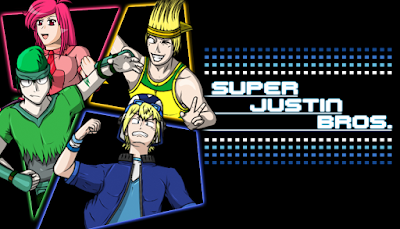 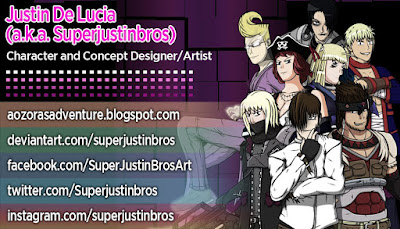 I haven't gotten around to giving them a test print run since admittedly I don't really have much a use for them just yet (and I'm not sure what I would use to get them printed).
Posted by Justin De Lucia at 3:44 PM No comments:

10 years of Super Justin: the Blog

Well I can't believe I'm saying this, but Super Justin: the Blog is now just about a decade old- this month will be the tenth anniversary of the site's launch back in 2009 (as well as my DeviantArt account). It's been quite the ten years, with Super Justin coming to an abrupt end after being my childhood dreams for all of the 2000's and the launching of Aozora's Adventure, WARMAN, and many other projects.

So what's in it for this blog? Well, not much, except maybe the removal of the art widgets on the sides of the blog since I don't update much (and the removal of some links to reduce clutter as I don't use most of them these days). Otherwise, I'll keep making stuff as fast as I can produce them.

In other news I'm also planning on doing more streams to Twitch once I get myself a good microphone. In the meantime you can check out my Twitch page here.
Posted by Justin De Lucia at 10:13 AM No comments: