Posted by Justin De Lucia at 6:00 PM No comments:

Email ThisBlogThis!Share to TwitterShare to FacebookShare to Pinterest
Labels: Splatoon

One particular image that I wanted to share that wasn't in either Volume 1 or Volume 2 was this one, drawn on June 12th, 2008, which should give you an idea of what the Super Justin series as a whole was intended to mimic. 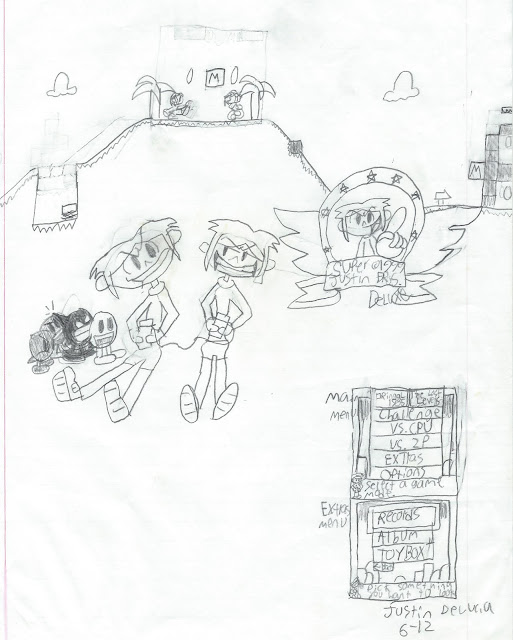 Disregarding the false "©1999" copyright date (where I pretended my games did exist), this was primarily Super Mario Bros 1 (or Deluxe in this case) mixed with Sonic the Hedgehog on the Master System/Game Gear. You have the general large level designs with slopped terrain of the later with some features like blocks and powerups of the former. This particular image showed off the two-player versus mode, illustrated by KND-style Justin (left) and Matt (right) playing the game on their Game Boy Colors. To the left are four creatures known as Boois, which where ghostly creatures that would serve as literal "ghosts" in Vs. CPU, mimicking the player's best times on each stage. And as better times were scored, they would turn to green, then red, then black. At this point they gained fuses and were re-named "Bombis", which this image goes into greater detail on.

Oh wait, why am I going super-in depth on super old art again?
Posted by Justin De Lucia at 4:23 PM No comments: