So you may have heard me speak mention of a game called Sonic Robo Blast 2 Kart on Twitter a few times the past few weeks. 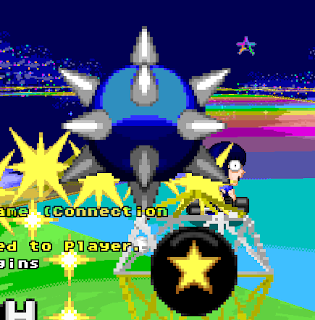 I guess you can say I've been addicted to it and went through the trouble of forwarding ports just so I could host a custom server with all the characters I created for it so far. And that includes the original Super Justin trio of Justin, Roger, and Zax.

To my surprise, the server gathered quite a bit of traffic last night, and while everyone stuck with mostly Sonic characters, there were a few brave souls that tried out one member of the Super Justin trio each. I stuck with the trio pretty much the whole server, though unsurprisingly Justin became my most used in the server.

Everything was chaotic and everyone was trading positions through the tracks like crazy. Heck, I'm not ashamed to admit that I got whooped quite a few times myself.

Hopefully I have enough motivation to continue making characters- it's a very time-consuming project just to finish one character- playtest them, and submit them. Sure I could crank out characters pretty quickly, but now that I have other things to contend with, including the holidays, working on Aozora's Adventure characters and lore, and doing sprite rips, you may have to wait a bit longer until my next character is complete.
Posted by Justin De Lucia at 10:35 PM No comments: