Well it's December 31st, and what felt like one of my more busy years of productivity is now going to become a long-distant memory, as is the tenth year I spent with an online presence of some sorts. 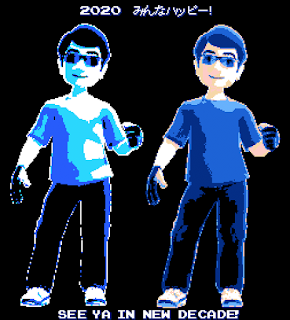 And technically the entry into 2020 also marks the end of another decade and people use that as a tool to celebrate and look back on what they did for the past 10 years. As for me, I don't really have much to comment on other than I think this decade was when I finally decided to grow up. Over those 10 years I discovered many new hobbies and made the biggest leap in artistic quality ever in my life as the previous decade ended and this one begun. And it's also where my most successful project, Aozora's Adventure, took off and grew to what it is today, and while there's still lots of development and planning for the project, I'm glad it's been coming to life thanks to all the artists I've partnered with over the decade.

Perhaps the biggest impact of the decade was all the new people I met over the years and all the ones that I could consider honest-to-true friends. Sadly, not every one that I met in the earlier years of the decade managed to least until now, with artists and the like abandoning or leaving their social media presence and taking my ability to interact with them as a side-effect. Thankfully the new friends I've made as the later half of the 2010's rolled in managed to fill in most if not all of the gaps that were left by the people that vanished from time and space. And in 2016 at the suggestion of a friend of mine, I attended my first convention in the form of Castle Point Anime Convention 2016, and from there I made efforts to visit future local and semi-local conventions as a form of meeting and communicating with artists I followed and friends I made that were also into the same interests I had. It also kickstarted a further appreciation for the art of cosplay and led me to start photographing cosplayers at these conventions, leading to this year's AnimeNEXT in June where I managed to snap 190 total photos across the convention.

So where am I now? Well I decided to take a small holiday break from working on any long-term projects to spend some time with the family and wind down after spending months working on Splatoon racers for Sonic Robo Blast 2 Kart and not much else. Plus after so many conventions in 2019 (two in New Jersey, two in NYC, and another five local conventions) I needed some time to unwind and maybe start on some new projects without the pressure of a convention getting to me. Luckily the next con I will be attending won't be for another several months which should be enough to work on a thing or two before I set of getting my cardio on the concrete floors of the convention centers (seriously is it that hard to set up some benches!?).

Anyways I think I'll leave it at that before this post gets too long and drawn out. See you all next year.
Posted by Justin De Lucia at 10:21 PM No comments: 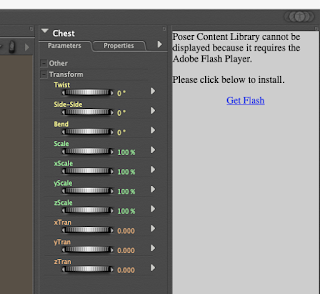 Okay, I have no idea how it happened, but because I've heard Adobe is killing support for Adobe Flash soon and it's automatically turned off on every new site, it somehow crept into my Poser and broke literally one of the most important parts of the program.

So now I'm kinda stuck with either trying to figure out how two get this thing to work again, or upgrade for $100. And considering this version of Poser is very, very old, I very well may end up just bitting the bullet and upgrading.

Funny that I had to do the same thing with Photoshop early last January after it suddenly started crashing every time I looked at it funny.

Anyways this basically means I'm being forced to go on hiatus from full body arts until I can get this fixed/updated. I planned on going on break anyways for the holidays due to my psychical condition being a bit questionable lately (it's not a subject I want to discuss and I'm sure it wouldn't change much if I explained what's up in detail) and me spending way too much time on this one Sonic Robo Blast 2 Kart project that I spent literal months on.

But yeah that's pretty much how things are going right now. I'll probably post another update when it's not super late out (I'm typing this at 1 in the morning) and I'm not in a rush to sleep.
Posted by Justin De Lucia at 9:54 PM No comments: