Convention Photoshoots: May and June 2018

For those of you that have been wanting to see my cosplay photos from Castle Point Anime Convention 2018, AnimeNEXT 2018, and EternalCon 2018, look no further! Here are some links to the collection of cosplay photos I shot at three conventions in the span of a month.

Enjoy.
Posted by Justin De Lucia at 3:37 PM No comments: 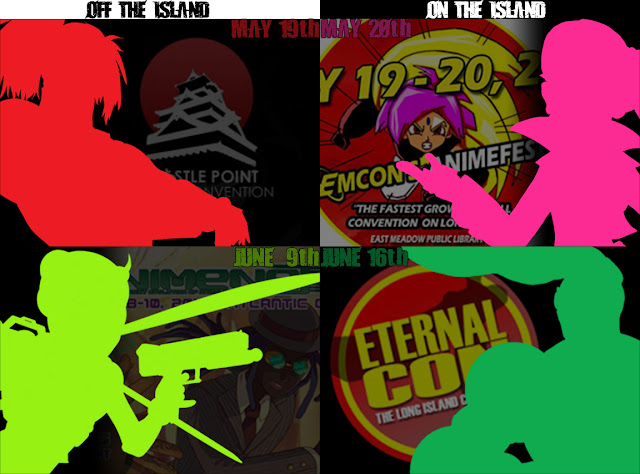 Well it's been a long time coming but I am now fully done with all of the conventions that I had announced early last May. It was a good selection of conventions overall and I enjoyed my times at them, so I might as well post some verdicts:

There's one more con that I'm planning to attend soon this month, and it'll be another Long Island-based con, so I won't be announcing it since (aside from the Long Island Retro Gaming Expo), conventions from Long Island don't have that many attendees. As for cons in the second half of the year, the ones I'm interested in and definitely plan on attending aren't 100% set yet. There's also Otakon, but to get there would take me five hours of non-stop driving- even more than AnimeNEXT, so until I'm fully comfortable with spending the evening in a hotel and have both lots of money, an improved sleep cycle, and a well-powered laptop to check up on all my sites and such when I'm out as my phone isn't enough for that kind of job, that convention is a no-go. My goals are to attend aside from the aforementioned Long Island Retro Gaming Expo the following cons: New York Comic Con 2018, DerpyCon 2018, and AnimeNEXT 2018 before the year ends and I spend several more months convention-less until the next May.

If anything comes up, you guys will be the first to know. With that said, till next time.
Posted by Justin De Lucia at 8:07 PM No comments:

Since it's been a while since I posted on this blog (as per usual) and because I only brought this up like, once on Twitter a few months ago (I think last March), I thought I'd shed some more light on it.

Not too long ago, Aozora's Adventure was divided into three universes. The "Original" universe, and then the "Oriental" and "Darkenss" universes, one of which started in August 2010 and the other around March of 2011. One would be focused on an ancestor of Aozora in Japan's Edo period while the other would be a much darker take on the Aozora formula. Fast forward years later and due to lack of updates and general interest in favor of the "main" storyline, plus with the continued developments of WARMAN, I announced to put the two side-stories on indefinite hiatus.

That included their respective leads Amano and Dedrick, whom I just did not have enough material to work with really. However, there was one character from the Darkness series that I thought had some kind of potential, even more-so than Dedrick. And that was Dedrick's sidekick and best friend, Izanagi. 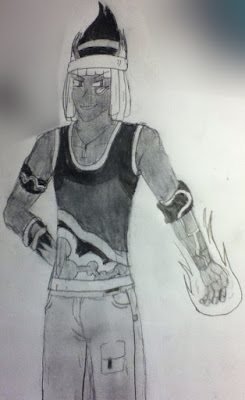 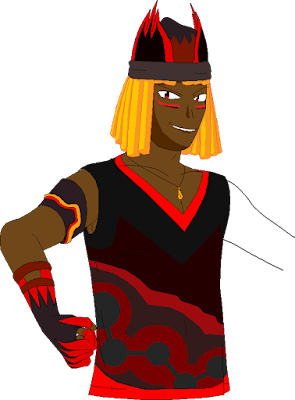 As you can probably tell I didn't get very far with him either, other than him being a mostly harmless demon with pyrokinesis with heavy Jamaican overtones in his design (but not to the point where he becomes a racial stereotype), but with Dedrick now gone, Izanagi could potentially be the lead cast member of a one-shot project.

And that one-shot project would be, as absurd as it sounds, Izanagi- migrating from the Underworld and having to hide that he did so, becoming the lead cast member/host of a sitcom sketch series hosted in California (yes, like Nickelodeon's All That) where Izanagi partakes in talk shows and sketches with other cast members and actors (that lack superpowers and supernatural abilities as they didn't come form the Underworld). The twist would be that it's secondly an action series thanks to a rival demon, one that looks like he came out of Hell aside form the green coloration and looking like a combination of animatronics and a man in a rubber suit. This monster would send goons and monsters to sabotage Izanagi's show- forcing him and his crew to drive them all out. In the meantime, the demon would run his own live-action TV series to try and usurp Izanagi's ratings from the top spot, using big-budget set pieces and other-top-of-the-line creative sketches to drive in viewers. This rivalry would not be played seriously at all, and even though Izanagi has access to powerful fire magic, he can't go all out or else he'll risk revealing what kind of being he really is and potentially- destroy the sets his show takes place on.

As the series would progress, Izanagi would slowly reveal new skills with his pyrokinesis during sketches and learn to control it better so it's less dangerous to the secondary cast he stars alongside. The sketches of Izagani's show starts to pick up the pace in craziness and soon Izanagi would find himself in more serious matters that could potentially either make or ruin his show and legacy than just having to ward off the rival demon's minions every so often.

Otherwise, that's pretty much the idea. Not sure if I'll decide to go with it but just incase these were the ideas I had in mind for the return of Izanagi.
Posted by Justin De Lucia at 4:20 PM No comments: