Last time on Super Justin the Blog, you may recall that I lost many if not all of my ripped OST's and my desire to slowly revisit many of these games and provide rips not widely available online or ones that are improved over other downloads of the same soundtrack. 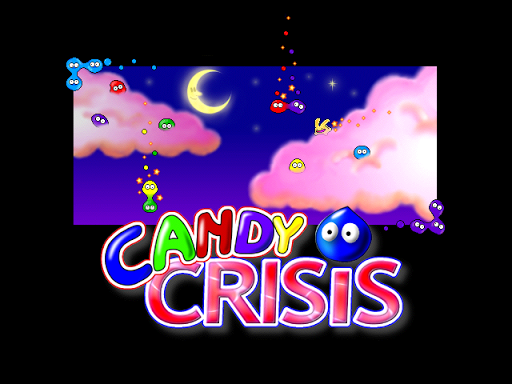 Today's subject and one that I have not tackled before is a Puyo Puyo clone released for Macintosh(!) back in 1999. Discovered around late October around when I received my new Mac, the soundtrack of Candy Crisis grew on me throughout November and to make getting a hand of it in a more widely-recognized format easier, I threw the audio files into a converter, added proper album info and track numbers, and compiled everything into a ZIP. For added connivence, I spliced the title screen theme "Delicious Nightmare" into three different songs: Unlooped and looped versions (the latter used in the game proper), and the second half normally not heard in-game due to the loop.

As for what's next, the next OST I decide to tackle will be one I ripped previously but never posted online, so it should be fresh and new to most of you.
Posted by Justin De Lucia at 1:59 PM No comments:

The search for good music soundtracks

For about eleven years I have been building up a steady yet expansive library of videogame music. Then last September it all went to hell when the Mac hard drive went dead. While I'm certain they could just repair the contacts on the disc, put it into a new unit and it would be all good, they wasted no time in telling me it was a total failure and I had never bothered to put a backup drive in place after bad memories of one in the past where external hard drives were very bulky and worst of all, required an external power source.

I spent 15k dollars into getting the contents of the drive extracted and what I got back was a range of JPEG's and PNG's, all with generic numbered filenames and all with their info stripped away, and only a small selection of MP3's- only 474 songs were preserved compared to the 27,000 or so songs I recall having before the crash. Many of the songs were composed of self-made rips with the good majority of them not being put up for download online (which I plan on re-ripping from scratch), others were downloaded from various sites.

That last point deserves a bit of a closer look. Over the past decade, there existed many, many sites that hosted videogame OST's in mp3 format, some rips of one game being better than others of the same title, and as time went a lot of these links either died completely or the sites that hosted them went offline, meaning no one could access the links. This is a problem as one specific website which hosts a slew of videogame soundtracks that people submit (or just take from other parts of the web), except a good few of the OST rips are riddled with problems, including bot not limited to:

Paradoxically, a good deal of some of the ripped OST's hosted by the site were outperformed by external rips from other sites (including in one case, this very blog you're reading now), a lot of which fall under the "links removed or website taken down" pool I mentioned earlier. While not every soundtrack I have taken interest in falls under this trap, it's rather sad when it does, especially when better rips existed either on this site or externally before being replaced (or in my case, losing it to the hard drive "failure") and with how things are looking things may not get better.

Wile it's not much, I may go forward with an idea I've been developing due to the inability to recover my old music/mp3 files: Re-rip a good chunk of the OST's that I had once ripped in the past across NES, Game Boy, GBA, and a few other older consoles and upload them to this blog. If my memories do serve me right, I heard one of the sites I used to rely on for music downloads, so I might start some kind of project there to bring up or resurrect better versions of rips.
Posted by Justin De Lucia at 8:13 PM No comments:

Well it's that time of the year again. For those of you wondering about the status of my Macintosh, yes I got it back, no I didn't get most of the content from the hard drive that failed. I'll touch up on the subject later in the moth so it doesn't hog up this post but lets just say it's not the same Mac and in a nutshell it's a brand new computer.

So where to begin. As you all know I routinely make content for a little game called Sonic Robo Blast 2 Kart and this whole debacle with my Mac's hard drive going dead really set me back quite a bit. I planned to finish and release one of the characters I was developing by late September but my unfamiliarity with Windows when it comes to making art plus the screen size being rather small meant I decided to just take the six weeks off. Luckily some members of the community helped me recover some WIP's I shared previously so I didn't have to start completely over but I did get knocked back a few steps when it came to some of the racers.

For the moment I'm going to spend a few weeks playing catchup with these custom racers so I can finally get something out- in the meantime I've been making some custom "Kartmaker" templates with the intent of helping out others since it became the de-facto way to make racers for some time and there's certain racers that require custom ones to work due to extra frames or having too large of a body to support an 80 x 80 pixel space without resorting to the larger 160 x 160 space-per-sprite template (leaving a lot of wasted space).

Anyways, here's what's on the radar for my projects for SRB2Kart.

Further plans are TBD.
Posted by Justin De Lucia at 11:08 AM No comments: