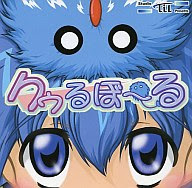 Once upon a time, it was December 2018 and I was watching some Sunday Night Vinesauce, typically containing corruptions and/or grab bags of different games, some well known (like the nineteenth-millionth Super Mario 64 corruption or the thousandth Banjo-Kazooie opening sequence but messed up) and some obscure (late 90's early 2000's PC games, prototype collections, and "failed mascots"). This time the theme was Japanese indie games, aka doujin soft games typically sold through a convention held twice a year known as the Comic Market, or Comiket.

Now as you are are likely to know I'm no stranger to doujin games. A little around twelve years ago I discovered a little game known as Rosenkreuzstilette and... let's just say my relationship with said game was kind of complicated and while I gave the sequel released some time later a fair chance and will admit it's good, it was kind of disappointing with how very little the game took the Mega Man formula and twisted it into something new and fresh. But that's a story for another day and I would absolutely not like to alienate the RKS fandom as my younger, less controlled freshman at high school self did all those years back.

Anyways back to the topic on hand. This is Kuball Net (クゥるぼ～る), a doujin soft game from 2003, developed by Studio Til. Like RKS, it was sold at Comiket for a few years with a trial version available for download online which contained a limited roster of characters and stages, (three each) Unlike RKS, the full version was never re-released in digital format and the current website of the studio makes no mention of Kuball Net. There are footage and screens of the full version and you can get a partial archive of the old site, but a download or other means to acquire the full game is practically nonexistent. It's a similar situation to a number of shareware games from the DOS era that never had their registered versions uploaded online or put up on digital storefronts. I'd even say Aquanoid, one of my personal favorites, was subject to this.

So I've told you this game is not easily accessible without getting into detail on what kind of game it exactly is. Well it's a sorts game of sorts where you play as one of several female characters, grab little fuzzy creatures known as Ku, and throw them into your goal to score while throwing barrels and  using special attacks on your opponent to disrupt them and throw evil black Ku into their goal to lower their score. If one side stashes up too many Ku, the referee, the small siren girl Lou, pops out of one of the goals and runs around the arena. If stunned and thrown back into a goal, whichever side Lou was thrown into will be at a huge disadvantage.

The three characters of the demo include: 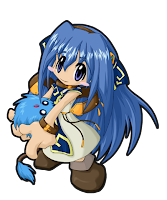 Fal, the cute and sweet (according to her oversized eyes and blush stickers) girl with long blue hair, 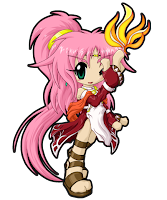 Tiara, the pink-haired lady with a fiery passion, 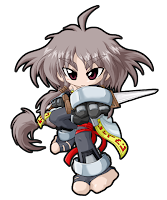 and Diva, who quickly grew to be my favorite of the three girls if you know my love for tough characters.

Among them included the likes of cat girls Mia and Rin, the athletic long-haired Ayane, and the kind of nerdy(?) Yukari. Two other characters, Iris and G Yukarin, got introduced afterwards, bumping up the roster to nine, as shown in this pic below.

This game isn't exactly on my high-priority list of games to own and I'm sure if I did get it, not much would change except having to swap out the demo version that's been on my Windows 2000 since last year with the full release version (and possibly being able to post more assets of the game online onto the Spriters' Resource for archival purposes, plus if I ever decide to maybe do a full on remake with more characters/stages and a new "arrange mode").

That's all for now.
Posted by Justin De Lucia at 4:02 PM No comments: