A while back I mentioned a game known as Orborun, a Super Monkey Ball-esque ball-rolling game that had an online demo available for some time. Since then, the full game was just recently made available, which contains many new improvements and environments.

Now where do I fit in all this? One of the characters in Aozora's Adventure, Ball-Kun, was used as the basis for an unlockable skin for the "Lightning Orbot" character, as shown below:

Posted by Justin De Lucia at 8:09 AM No comments:

Email ThisBlogThis!Share to TwitterShare to FacebookShare to Pinterest
Labels: Orborun

Greetings everyone. As you can see from the above screenshots I have decided to create a ROM hack of the NES port of Taito's arcade smash hit Arkanoid. This hack was constructed based on a Chinese translation (of the Japanese version) you can find online, and unlike Dragon Eye Studios' Dimension of DOH, this hack intends to feel more like an official game with proper difficulty, decent power-up capsule placement (so it feels randomized like mostly every other Arkanoid clone), and 32 levels created based on a Chinese theme. It was constructed thanks to the "Arkalavista" utility by Trax, whom I'm assisting with to further advance the emulator so it becomes more user-friendly and not as complex to use (especially compared to the original 1.0 release of the utility) by someone who's not familiar with hexes or ROM hacking in general.

I'll release this onto Romhacking.net once it's ready.

Posted by Justin De Lucia at 3:07 PM No comments:

Email ThisBlogThis!Share to TwitterShare to FacebookShare to Pinterest
Labels: Arkanoid I wouldn't think I'd ever touch this game again after my failures to try and get it to run the first time. But after finally downloading all the necessary files for ePSXe and running Arkanoid R 2000, I got the motivation to finally try Salaryman Champ in MAME (since the game in question had a PSX port).

Before I jump in, let me explain a bit of the game's backstory. Not the other "Bishi Bashi" games that predated Salaryman Champ but just this game in general. Each player takes control of one of three salarymen: Burning Red, Intelligent Green, and Cool Blue (their names according to the PSX intro) and competes in 27 individual activities that all utilize three buttons. Unlike other "party" games such as Daisu Kiss, all the mini games progress through a set order rather than being randomized, and some play almost identically to each other, leaving the game a bit short on variety. Players are given ranks based on the number of victories and defeats he/she gets in each mini game, with victories moving upwards and defeats moving down (any player that doesn't finish in either 1st or 2nd loses a life, and must insert another credit to continue through). There are two Top 10 leaderboards featuring those that finished the game, one for Best 10 and one for Worst 10.

In the world of home emulation... ho boy. Unless you want to spend hundreds of dollars to get a Japanese PSX and Salaryman Champ itself, get this: In MAME, the game only supports two players compared to the three that are normally featured, with Intelligent Green always being controlled by the computer, leaving human players only to Burning Red and Cool Blue. To my understanding, there are certain Bishi Bashi cabinets (in Japan) that run with only two sets of buttons instead of three (and considering how almost all Japanese arcade games are not given dedicated cabinets; they're all conversions into blank cabinets). The PSX port, to my knowledge, also only does two players (with Cool Blue now the always-CPU character) unless you have a multitap, from there you can link every controller to the console to present all the characters with someone to control them.

To get Salaryman Champ running in MAME, you have to get both the ROM, (I believe) a BIOS, and two CHD's. Then you put them into the ROMS folder just like you would a basic standalone game, run it, press the indicated buttons/keys when prompted. It will take some time to configure the controls. Configuring Burning Red's controls is easy, but Cool Blue's three buttons are mapped else ware to whatever is Player 1's Down, Left, and Right buttons in other MAME games. From there you shouldn't have to wait much for the game to load up after booting the ROM. Just insert your credits when the game enters attract mode, and there. You'll be playing Salaryman Champ against some of the most brutal A.I ever known in any party game.

I'm as of yet uncertain if the PSX port of Salaryman Champ has been dumped publicly; every download points to the Arcade version. Similarly, I'm trying to figure out how to set 3P Bishi Bashi cabinets in MAME so I can control all three characters with no computer players.

With that said, there's nothing really much left to comment on. As a little bonus, here's some stills of the playable trio. Use them for any purpose you desire. 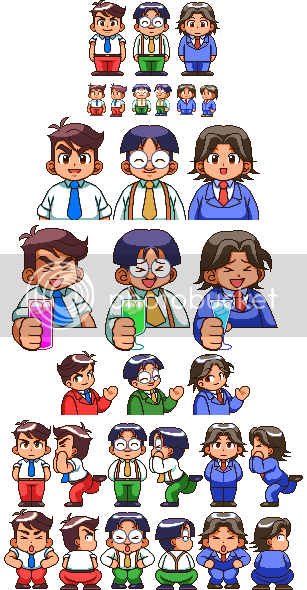 FTR, yes I'm quite aware of the recently-launched Mighty No. 9.