Greetings, readers.
A while back you may remember a project of mine that has gone between being worked on and going on hiatus. It did get a release some time ago but since then- many, many more features have been added to it since then.

Of course I'm talking about my Otaku-Ball (or of you wanted to be technical, Geek-Ball or Nerd-Ball) project, a love letter and tribute to a plethora of Breakout and Arkanoid clones, worked on by Mr. Block (seriously, give him all the credit for the coding, the guy's a genius and deserves all the respect) and myself.

If you're wondering what has changed, lots of things actually. The title screen got a big overhaul, some new sound effects and sprite work were added in, new enemy varieties based on the original four Arkanoid enemies now join the Menacers, and the single-player campaign now has 96 total levels to explore across multiple pathways (it would have a NG+ with all new worlds/levels but that will be for a later release) Plus a few squashed bugs/issues. 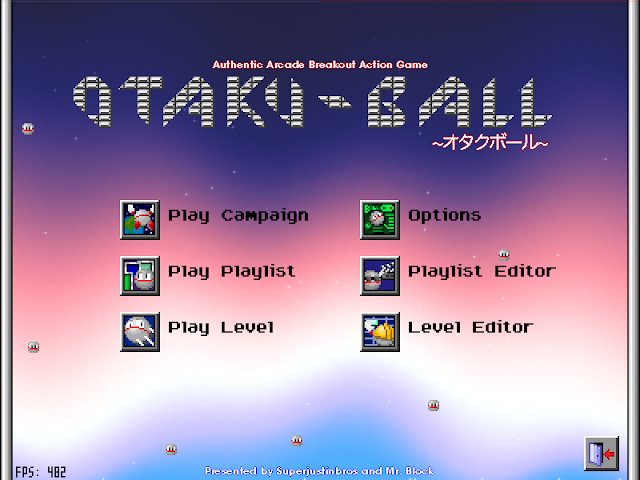 So yeah take this as a treat from myself to show what has changed since the project's humble beginnings in 2014 (and pre-planning going to as far back as 2007 before the project had a definite name in 2011) and the first public release in 2017.

Take note that this is technically a beta, so expect there to be the occasional game-breaking bug looming about, but for the most part it should be stable and perfectly functional. Plus my social media links and e-mail are always open if you catch a bug.

Email ThisBlogThis!Share to TwitterShare to FacebookShare to Pinterest
Labels: Otaku-Ball

I wrote a little something (in french) about your project :
https://duracelleur.blogspot.com/2020/01/quand-les-casse-briques-regnaient-sur.html
++