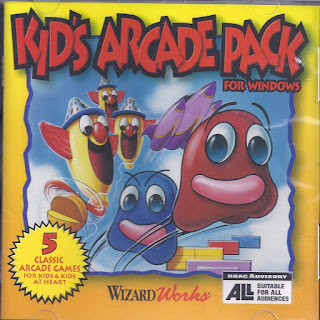 In another (possibly ill-fated) attempt to preserve and showcase content from my times growing up (and since there are no copies of the disc for sale on eBay or Amazon, and no archives of the disc on archive.org), here is a complete archive of the "Kid's Arcade Pack" disc, featuring 5 arcade-styled games aimed at a younger audience. Three of them- Cartoon Combat, Circus Balloons, and Macman Kid are clones of Columns, Missile Command, and Pac-Man respectively, while Diamonds and Pegleg Kid are scaled down versions of Diamonds and Pegleg (which I do not own and may have never been released on Windows to begin with). Macman Kid furthermore is a derivative of an earlier version called Macman, which has less polish overall. Cartoon Combat I believe is also an offshoot of an earlier Missile Command clone, but there's not much research on it (and I wouldn't care since it's my least favorite of the set).

You can download all five games here. Note that they are all 16-bit Windows applications and will require a computer or virtual machine capable of running them. (If there are any missing files, please let me know!)

If you're looking for just Diamonds for Kids or Macman Kid, you can instead download my Diamonds collection or my Macman Collection, which both contain their "Big Kid" versions along with the "Kid" versions.
Posted by Justin De Lucia at 7:41 AM 1 comment:

How I'd change Splatoon 2

It's no secret that I'm a fan of Nintendo's little ink-shooter game Splatoon 2 and being someone that likes to share his thoughts on games (for better or worse), I conjured up a list (you can tell I'm a fan of those) of ideas to improve the Splatoon 2 experience.

One rule I kept to with this (as opposed to my usual "list of suggestions" lists from the past) was to stick to QoL (Quality of Life) updates as opposed to things that radically change the gameplay itself.

Without further ado, here's the link to the document.

https://docs.google.com/document/d/1BX8qizdCb-TvsZ8zBOtSCT7tzCrR2RJiL6PKOxqvf78/edit?usp=sharing
Posted by Justin De Lucia at 10:39 AM No comments: