This was something I've been meaning to do for a while and now that my Macintosh is still in the repair shop I figured I'd finally get it out of the way.

You may recall back in September 2016 I posted a custom-modded version of 3D Maze Man that added a few extra levels to the campaign and restored the otherwise cut Winter Wonderland world from Fantasy Zone. The truth is, I also have modded the other four games in the "series", which were all built from the same engine and feature otherwise identical gameplay. 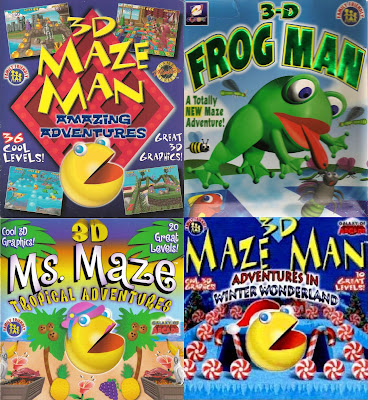 3D Munch Man II not pictured
These modded versions serve to slightly distance the games from each other- primarily in the audio department. Rather than pull all of the music from the original 3D Maze Man, the other games sans Winter Wonderland are given new and unique soundtracks. 3D Frog Man takes its OST from the otherwise unrelated 3D Frog Frenzy, 3D Ms. Maze uses the tracks from 3D Caveman Rocks!, and 3D Munch Man II has a new selection of tunes assembled from various Webfoot games. The sound effects and in-game text have been altered as well to varying degrees (no more screaming, instead you get the classic Pac-Man death sound and a few other "funny" sounds if a ghost catches you) to give each game a different feel, if that makes sense. The original sounds are still included if you wish to revert the changes.
The odd one out in this collection is Winter Wonderland, the only game in the pack that is almost identical to the original save for text changes and is only here for the sake of being the complete collection with no exceptions to the rule.
You can grab the pack in its entirety here, and remember to use Windows 98 compatibility if your computer supports it.
=Download=
Posted by Justin De Lucia at 10:49 AM No comments:

The return and retool of Super Justin

Long ago, you may recall back when I was a teenager I crafted a project named "Super Justin". Needless to say it was an absolute mess and after roughly seven months of existing on the net, everything about it was dropped. Today I still look back at certain stunts I did with the project in pure disgust but I still saw a very small glimpse of hope for it, and for the past few years I've been toying with the idea of bringing it back to an extent, but with a massive overhaul that gives its main cast better characterization and does away with all of the controversial elements that the project was associated with back in 2009.

I sort of teased this idea when in late 2018, I re-created what I nowadays consider the "main trio" (Justin, Roger, and Zax) into SRB2Kart, a game that readers of this very blog should be familiar with. 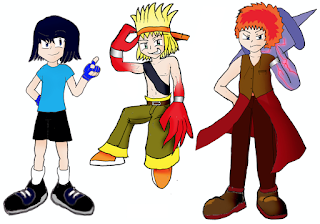 Eventually they gained a small niche among the game's custom character community and I decided to give them further revamps and retools, similar to what I recently did for most of the other characters I made for the game in its first three months. This includes giving them new sprite sets to put them on par with my newer racers while also reintroducing two characters originally envisioned as siblings to the fictional Justin. Due to circumstances regarding my Macintosh I had to delay the project, but it will re-enter full swing once I have everything (hopefully!) restored.
Otherwise here's a list of changes that I plan on launching in this reboot (yes, a list, you know I love these!):
Anyone not listed here will either be replaced or removed. Mostly since a number of the designs strike an uncomfortable itch and are a little too close to what was wrong about Super Justin and why it got canned in the first place. I've changed a lot since then and I'd rather keep the main cast short and sweet instead of turning it into something large and complex like Aozora (and Aozora has a very good reason to be as big as it is). Additionally, Justin will get a new adversary to oppose- and he should be a large improvement over any of the previous adversaries he had in the past, even in the incarnations of him prior to me entering the online world.
Posted by Justin De Lucia at 10:42 PM No comments: