Some images I pulled off the game's store where you can make merch of the New Kid, so of course here's Super Justin filling that gap.
Yes I'm aware the game is rated M for Mature (and for very good reasons) but most of us have probably watched South Park when we were "underage". Heck I remember when I used to watch it back in like, 2005 before I entered middle school (then again it was also the year I discovered Newgrounds and that site had lotsa not-family-friendly things) and I had the N64 game since 2003, when I was in elementary school.

Anyways I'll just shut up and post these and promise I never mention South Park again from here on out (this is a PG-13 blog I must add). 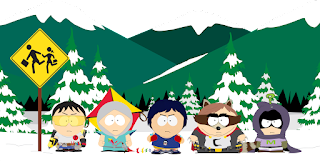 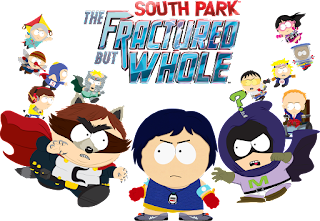 Also no you're not getting a Super Justin reboot anytime soon.
Posted by Justin De Lucia at 9:03 PM No comments: 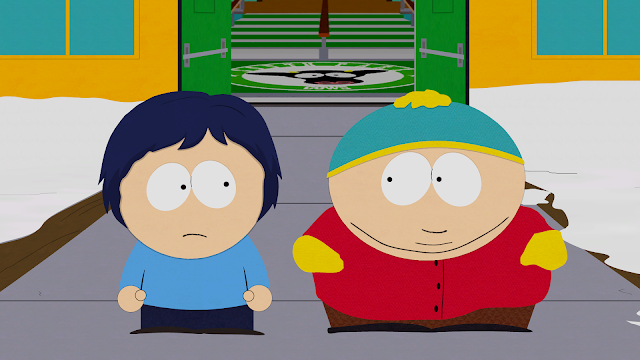 The crossover you never wanted.
Posted by Justin De Lucia at 8:12 PM No comments:

A word on my current projects

As you all probably know, I'm the guy that runs three universes: Aozora's Adventure, Otaku-Ball, and WARMAN. Here I'm going to give some updates going forth in regards to those.

Firstly, I want to address Aozora for one particular reason. Back in 2010 and 2011, I launched two side-story universes: one centering around ancient Japan in the form of the Oriental side story, and another focusing on a literal "inner Earth" with more dark/heavy metal themes in the Darkness side story. However since I don't really have any ideas for those universes and have lost interest in them in favor of the main series, both the Oriental and Darkness side stories are currently on infinite hiatus until stated otherwise.

My current goal for Aozora is to find more potential designers for characters in the series that currently lack them, and perhaps fully launch the next wave of characters next year in 2018. In the meantime I'll continue to put work into the new Wiki which I plan to keep more up-to-date than the Wikia wiki. It will still continue to receive updates since I plan to keep articles for side-story and non-Aozora characters there. Speaking of...

I already mentioned Otaku-Ball in a previous post, but I'm going to add onto it and say that any sort of release date for the next version is still undecided and potentially won't be coming for a while. If Mr. Block has any updates, I'll let you all know.

Next is WARMAN, which has kinda been on the wayside for quite a bit. I have no desire to cancel or scrap it, but at the pace it's going, the third entry in the series, SKYMAN, may never reach the conceptual stage especially with me focusing on finding designers for Aozora instead of WARMAN. However once I get a full design for M-11, I will be drawing her in the style of M-10 and M-07 for consistency reasons, plus to put final touches on her design.

With that said I'm not sure what to expect next.
Posted by Justin De Lucia at 12:55 PM No comments: