Since I'm still as much of a Pac-Man nut as I've always been, I thought I'd share this with you.

While looking through a list of un-dumped MAME titles, my eyes caught onto this unauthoritised pseudo-sequel to Ms. Pac-Man called Ms. Pac-Man Twin. It was created by a company known as "Susilu" and it allows two players to play the game simultaneously, with the second player operating a green-colored Ms. Pac-Man.

As opposed to the millions of other two-player Pac-Man games (such as Tengen's Ms. Pac-Man or Pac-Man Arrangement), there are two layers of pellets that have to be cleared from the maze; a red layer and a green layer. These layers can only be removed by the Ms. Pac-Man that matches the color of the layer (Power Pellets are universal, they can be eaten by either player and don't exist on a layer). Once both layers are gone, the players can advance.

So rather than giving you low-res distorted arcade screenshots, I went and made my own recreations, which includes layouts of the other three mazes.

Update: Here's V2 of the mazes, with a palette that replicates the original screens more closely.

Details and References for aimed designs for WARMAN/WARWOMAN. 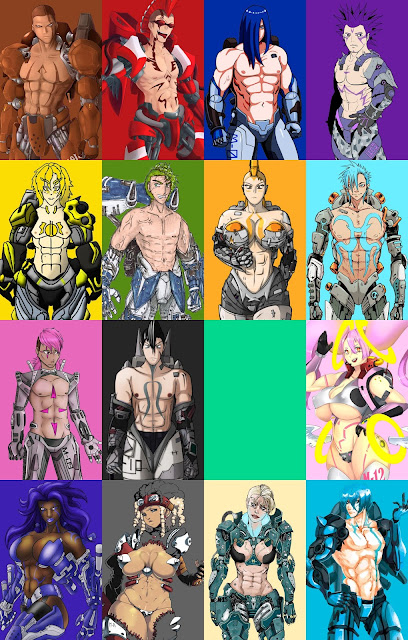 Since I'm seeing if others could maybe contribute the designs for the various WARMEN in my rather very young (in concept) WARMAN series, I'd prefer to list off better descriptions for each of the remaining WARMAN concepts.
http://aozoraadventure.wikia.com/wiki/WARMEN
As always you can find the currently-made content for the series above, which includes designs for M-10 and M-07 to show how detailed I need these guys to be (and yes their chests are intended to be shown), and a general synopsis of the series itself.

A bigger look at all the models can be seen below:

Initially, earlier models are based about raw power, thus they have slightly more bulky appearances than later models, which are geared towards a more balanced speed/power tradeoff. Though I since then decided having each model just vary in power and agility, with some later models having more of a power build than an agility build even if they don't have low ID numbers, especially M-10 who's considered a "balanced build" but favors strength slightly.

And just to refresh anyone's memory, models with higher numbers are considered "newer" than those with lower ones. They're also full, 100% artificial; and despite their very human-like anatomy and the material used to make their skin very life-like, they possess no sexual/reproductive organs whatsoever as they don't really have any reason to breed.


With that said, onto the list. All of the designs are both male and light-skinned (with the same skin tone as M-10 and M-07 unless otherwise noted, and their hair color is the same as their main color:


M-16: Light Blue (medium-range hair, is the only male of the WARWOMEN group, the "pretty boy" who acts slightly on the flamboyant side but doesn't play the trope completely straight)

M-15: Cream (Female, fits the "tough girl" architecture, sports a lot of battle damage and lack of visible pupils dup to her injuries that she never cares to get fixed)

M-13: Indigo (Female, Black skin, Frizzy long hair, wears lipstick that matches her signature color, the “bulky powerhouse” of the WARWOMEN, has the thickest legs and posterior area. Typically acts serious and direct when doing her job, though outside combat she’s more comfortable, laid-back, and supportive)
Her physical shape is based on a general dark-skinned stripper(sorry I had to say that)/performer and is very curvy like M-07, with strength that almost rivals those of "heavyweight" models 01, 02, and 06.

M-12: Bright Pink (Female, untrimmed and straight short hair on her head, longer hair is curled up into two large thick pigtails on the sides of her head, has a cheerful “Girly Girl” personality who likes cute things despite her occupation and role as a war machine, is somewhat clumsy and likes to make people and herself happy, but can snap if frustrated.)
She a slightly less curve to her figure than M-13 and is not as bulky, being based on a balanced power-agility model, leaning slightly towards agility, but still sports the WARWOMAN tradition of larger than normal breasts and (to a lesser extent) buttocks.


M-11: Teal (Female, balanced build, has medium-length hair that extends down to her neck in some kind of exotic style (like a pesudo-bobcut), shares some personality traits with M-10, being the heroic determinator who acts on the serious side and is a bit of a tomboy)
The only real inspiration regarding her that I could think of would be something along the lines of a more mature Ryuko Matoi from Kill la Kill in her late twenties (thus, acting like an adult), along with the basic mold of most other female protagonists in Shonen/Seinen anime. Thus she should display a lot of bad-assness much like M-10 with some of the other female models' sexiness.

M-09: Pink (Long Hair, dark skin, self dependent and moody at most times with 1/4th closed eyes)
Based on a particular male NSFW model that to prevent people being scarred for life, I had to crop more than I originally did (especially since all I wanted to show was the hairstyle and to a lesser extent the eyes) 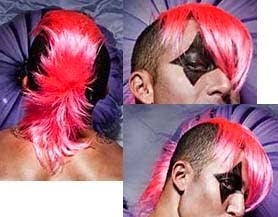 M-08: Sky Blue (Short hair with a short spike trim in the front)
I don't really have any design or personality preference for him, probably a calm, supportive character with a bit of a smooth, and happy go lucky (though not too cheerful) personality.)

This is unfinished concept art of M-08 from artist Dedyk, if you want a bit more of an idea on what he should look like in the end

M-06: Green (Short, partially messy hair, Shaved on one side)
No design preference for this one either; though from what it feels like he'd have shades of a generic Shonen anime/manga protagonist.

M-05: Yellow (not blonde) (Long, somewhat-messy dirty blonde hair with a front bit that grows in front of his right eye, a lazy but confident fighter, has lazy eyes and mild freckles on his cheeks, has slimmest chest area, the design of his mechanical legs resemble baggy pants).
Again no real design basis for him, aside from his chest area being the most skinny (but still showing muscles) of the ten WARMEN. So expect him to have a bit of a "pear" shape when you go from his hip to his legs before it goes into the robotic legs, especially when viewing him from his side. Additionally, the yellows present on his body progress in the shading order of yellow to dark yellow to a darker yellow, not yellow to orange to red.

M-03: Navy Blue (Long clean/smooth hair that drops below the face and covers one eye, falls under depression easily, but not as much or often as a generic "depressed" guy, and he is up to fighting and putting up his best efforts.)
Hair-design wise I had mostly Venom from Guilty Gear on the mind, but with one or two snippets trimmed to show the other eye. (leaning towards exposing his left eye)

M-02: Red (Long hair formed into an axe blade, "cool" and carefree personality,  likes fighting the most out of the others while smiling and providing positive influence, wears sunglasses)
I should point out that this guy likes to smile and is yet another design of mine to be loosely based on Johnny Bravo (mostly in his personality). The mohawk in his hair forms into an axe, with a razor-sharp blade forming the very top of the "blade" hair.

M-01: Brown (Most heavy and muscular of the pack, the only one with beige skin, the loyal one that always gets the job done.)
Perhaps based on a typical "bear" model, minus all the body hair and developed into a more bodybuilder shape than a "fat" shape. Also while he is larger, he's not super-huge or anything. He's a more natural height/shape.

And with that that's pretty much all.

Bonus: I also wanted to share a quick fun fact; here's the model that I took M-10's (facial) design from: 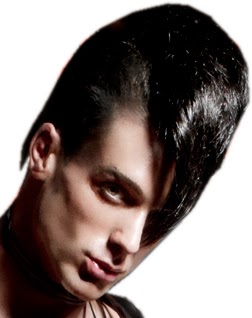 Posted by Justin De Lucia at 12:15 PM No comments:

Email ThisBlogThis!Share to TwitterShare to FacebookShare to Pinterest
Labels: WARMAN

Here's a gamerip I had made a while ago of Seta's unreleased NES title Bio Force Ape, not to be confused with Bio Miracle Bokutte Upa. But hey it'd be awesome seeing a terrifying baby monkey swat a rattle at mutants to make them inflate before it knocks the mutants into their own kind, destroying them in the process.

I seriously have no idea what I'm talking about, so on with the OST itself. 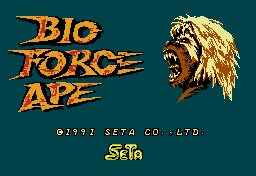 These are direct recordings of every song used in the game: the three level themes, several of the shorter tunes used for things like stage completion, and the Records screen theme which you can only hear in full by triggering the Sound Test.