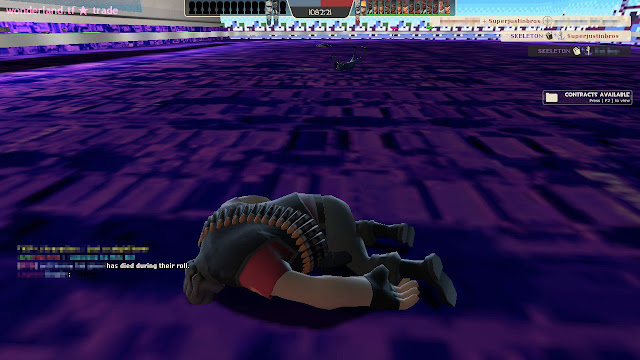 For the first month of the year January felt like one where I couldn't catch a break or was a vicim to peak laziness. To keep a long story short, I spent the first full week of the month watching Games Done Quick, spent the rest of the month slowly grinding through SRB2Kart characters in progress, spent a day downloading and getting Poser 11 to work, and then out of nowhere someone hijacks my Steam account and begun demanding hundreds of dollars just to get it back(!).

That last point is something I would comment more on but it stressed me the hell out and already having very little motivation these days between the pandemic still going strong and the lack of any conventions or other social experiences to help fuel my inspiration doesn't help. I did get my Steam account back and recovered some of the funds but it'll be hard to forgot what a catastrophe that was and, well, I still feel very, very lazy.

Part of the laziness stems from, well, not being able to do as much of anything as I used to. In 2018 and 2019 I was able to attend six big conventions per year (plus a smaller con or two sprinkled in there) and remain more physically active throughout the rest of the year through frequent trips to local towns and malls around my area. While I was able to go a few places before the lockdowns occurred, once the lockdowns began everything just went downhill. All my plans to make 2020 better than ever were shot down by everything either being canceled or closed up, and I mostly just went and used my remaining motivation to truck along through making SRB2Kart racers. And then September came and boom, I lose everything on my Mac and have to wait another six weeks to get a new one. Everything I had saved for eleven years was thrown into the toilet thanks to my idiocy to not back anything up save for a few WIP's of projects I shared online and images/renders I had saved on other sites and Discord logs. Even my Windows 2000 that I used to use very often lasted longer than my Mac!

The only thing that helped me cope with the lockdowns and everything else going on was being closer to my family and playing Animal Crossing New Horizons. When it came to other people I mostly continued to remain active in Discord channels to the point where it really started to distract me from personal projects. Normally that wouldn't really distract me much but this year with everyone under lockdown and social distancing guidelines up the wazoo it's because my main source of socialization alongside Twitter.

I'll make another update sometime next month, maybe inform the DeviantArt crew via journal what's been up lately too.

Posted by Justin De Lucia at 10:57 PM No comments:

Happy New Years! I know it's a bit late to say that now but all last week I was glued into watching Awesome Games Done Quick 2021 Online and it was kind of to the detriment of all my other projects. So while I figure things out and sort through some IRL things I wanted to get to (including finishing spicing up my game room and arcade), I have another game soundtrack to share which I originally ripped around August 2017 and listened to quite a bit around New Year's Day 2018, so I loosely associate it with that particular holiday. 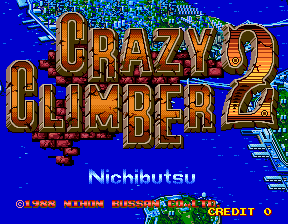 This is Nichibutsu's Japan-only followup to their 1980's smash hit Crazy Climber, released in 1988, and with it came all new music to jam along to while you ascend six super-tall structures. While there do exist several music rips of this game on other sites, none of them sound as they would on original hardware (as well as the Arcade Archives re-release and MAME) and they all splice together the game start and odd-numbered stage theme into one track. This rip uses a direct recording from the game's service mode sound test and separates the two aforementioned songs into individual tracks. While the tracks loop from the end to the beginning smoothly, every song otherwise begins with a drumbeat in the actual game, so that element was retained.
You can download the entire music rip here.
Posted by Justin De Lucia at 3:12 PM No comments: